Facts
APPLE INC. filed a design patent application of ”Component of a portable display device" (as shown in FIG.1), to the Taiwan Intellectual Property Office (TIPO) on August 17, 2011 and claimed priority date of February 18, 2011. The TIPO rejected the application at first, and APPLE INC. which dissatisfied with the decision of rejection then requested for re-examination. However, the TIPO rejected the application again on the grounds that the overall design of the application was disclosed by a cited reference (as shown in FIG.2). The APPLE INC. further appealed to the Intellectual Property Court against this rejection. Recently, the court made a judgement that the administrative act of the rejection made by TIPO was false.

Decisions
A design patent is a combination of an appearance’s design and a product in which the product itself must have functionality. To determine whether a design is a purely functional design shall be based on the features in addition to functionality, such as decorated features producing different visual effects. Most important of all, the object of the design patent is the overall appearance of the goods, even if the goods hidden or packaged in final-use, it should not affect its patentability. The plaintiff provided the figures proving the fact that different types of iPad (iPad-1, iPad-2 and iPad-3) comprise different components or parts, and also the shapes of the rear side. The design of the back side of the iPad is one of the numerous designs of the IPad, it should not be considered that the back side of the iPad is a basic shape of the must-fit portion of the two objects, and only for assembly or function.

Remarks
The patentee of a design patent has an exclusive right to prevent others from exploiting the designs that are identical or similar to the design patent without the patentee's consent. Determining whether a design is identical or similar should be based on the cognitive ability of the ordinary consumers when purchasing goods, not the view of people in the related art or an expert. In this case, the ordinary consumers are not limited to the general consumer or end-users, including the intermediate manufacturers, contract purchasers, or maintenance people, etc. Such person, when purchasing the electronic device components of the claimed application, may directly observe the complete appearance of the component, including the back side of the touch panel, the middle frame, the back cover, and be aware of the configuration and wire layout of the touch panel’s  back side , not only the overall design of the finished product.

In an application of the design patent, the drawing(s)/figure(s) shall contain sufficient views, such as a perspective view, a top view, a bottom view, etc., so as to fully disclose the appearance of the claimed design. In general, each of the drawings/figures is equally important for goods or products.

To judge whether a design equipped with novelty, the overall appearance of the component at the time of transaction should be taken into consideration, not just looking on a single drawing/figure of a good or a product. 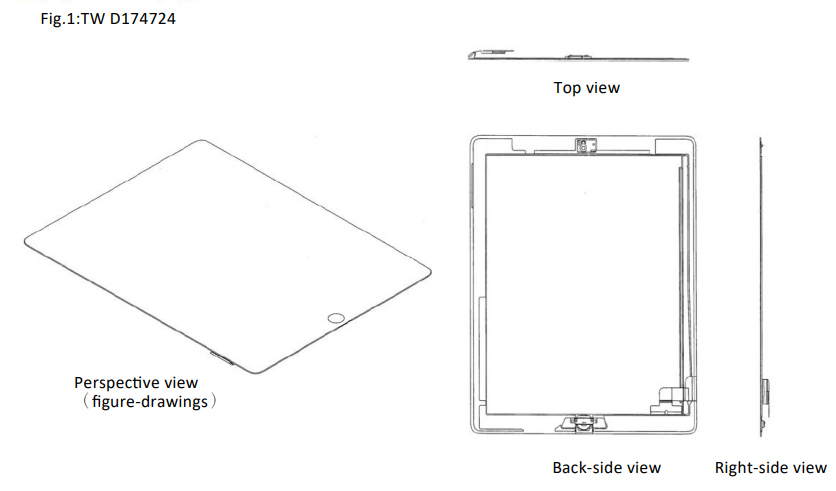 To facilitate Taiwan in joining the Comprehensive and Progressive Trans-Pacific Partnership (CPTPP), the Pharmaceutical Affairs Act coming into force on Aug. 20, 2019 in Taiwan has incorporated patent linkage. Earlier, the TIPO started to draft...

In Taiwan, patent applicants often receive an official action made by the examiner against an invention patent for lacking the non-obviousness of patentability. Even though relative regulations and brief enumerations are provided in Taiwan Patent...

Could a landscape feature be able to be registered as trademark?

A phenomenon of bioluminescence of marine microorganisms in Matsu is called “Blue Tear”, which has become a local tourist attraction.

Legal Context：Taiwan Patent Article 124（1）：「A design patent shall not be granted in respect of the shape of an article solely dictated by its function」...